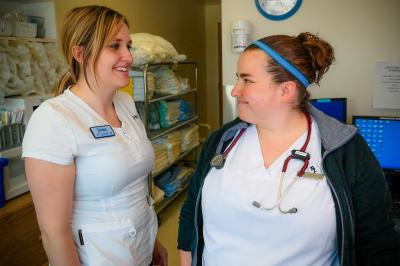 "This is a duty, part of the deal, and we'll save more lives no jokes for real."

"I'm part of the surgical quality team,” said Brown "They asked me to do something to encourage people to do our bedside safety checklists and I thought it might be good to try something a little new."

They started with writing up some simple poems they posted on the wall. Tomes such as 'Ode to the Whiteboard' and ‘The Falls Risk Rhyme’ still hang on the walls on 3 West. “People said make it in to a video…” said Brown “…so we made it in to a rap.”

Oddly enough neither Illsley or Brown are particularly big fans of hip hop. “I’ve always liked rhyming but I don’t listen to rap” said Brown. “I thought we could do some other styles but rap works best. It’s easier to learn.”

The first video, The Assessment Throw Down, (https://www.youtube.com/watch?v=j8TwWFmmPXs) got a lot more traction than anyone expected.  “On youtube we can see where everyone is seeing it and it’s been a across Canada”. They have now released a second video, The Braden Breakdown, (https://www.youtube.com/watch?v=7pGy566eDrA) which they’re hoping helps nurses improve their practice for pressure ulcer risk assessments.

The videos seem to resonate with educators. Illsley and Brown were invited to present to first year students at the Dalhousie school of nursing after the success of The Assessment Throw Down. “They wanted us to do it live…” said Brown with a grin “…we said it would be better to show the video.”    The videos are done as one continuous shot and they need multiple takes before they get it right.  How many takes?  “It was about 25.” said Illsley.  Brown adds “…maybe 15 hours start to finish from writing it to having it on youtube.”

It seems like a lot of work, but Brown and Illsley seem to have found a sweet spot to help educate staff and have a great time along the way.