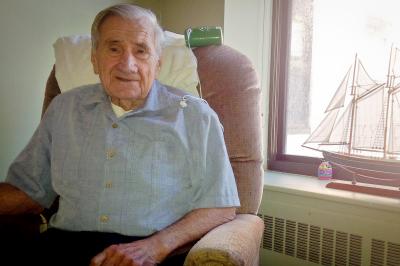 In 1944, Robert Wentzell signed up to sail on a supply ship he thought was making a six-week round trip to England. He didn’t expect that at 15-years old, he would end up off the coast of France supplying troops, armory and equipment to the biggest allied offensive of the Second World War – the D-Day Invasion.

“There was not a day that I can remember that we were not confronted with one or more attacks,” said Wentzell, describing the harrowing six-months he spent crisscrossing the English channel aboard the ship Robert E Peary as part of the Merchant Marine. Under daily attacks by airplanes and submarines, and the constant threat of mines, the ship eventually ran aground on another wreck and was sent to England for repairs.

Wentzell, like many of his comrades on the Veterans’ Unit at Fishermen’s Memorial Hospital in Lunenburg, finds it difficult to talk about the war. However, photographs, newspaper articles and other wartime memorabilia have been carefully collected and preserved in a book he keeps on a bedside table.

“There were a lot of painful memories for them,” said Sharon Burke, a registered nurse who has worked on the Veterans’ Unit since it opened in 1985. “But there is a camaraderie among the Veterans – especially those who had similar experiences. They tend to find each other and then they do talk a little about it.”

As the Veteran’s Unit prepares to celebrate its 30th anniversary, long-time staff members like Burke and licensed practical nurse Geraldine Morris reflect on a proud history of caring for veterans from the First World War, the Second World War, the Korean War and the Merchant Marine. The 23-bed unit offers a team approach to care that includes physiotherapy, occupational therapy, recreation, music, and other supports focused on enriching the quality of life for the veterans. They also enjoy activities such as picnics, fishing, scenic drives, musical performances, hockey games, sailing and swimming.

“We’re like family,” said Morris of the veterans, their families and the staff members and volunteers who care for them. “Since the first resident came through the doors, we’ve been serving the needs of the veterans in our community.”

The unit as received continued support along the way from the Fishermen’s Memorial Hospital Auxiliary, Health Services Foundation of the South Shore, and Veterans’ Affairs Canada’s staff as well as the individual members of the Zone 13 Royal Canadian Legion Branches and Auxiliaries and the Admiral Desmond Piers Naval Association in making it a safe, comfortable and pleasant home for residents. These groups have purchased equipment such as a wheelchair accessible van, hydro-massage therapy tub, exercise bike and other special items for the residents. They have also help with special projects and activities that play a major role in the daily life of residents.

“There have been a lot of changes over the years, but that has been constant.  It’s important to us that they know how much we appreciate that support,” said Morris.

The unit will officially celebrate its 30th anniversary on Sept. 24 with a ceremony in the Veterans’ Garden.