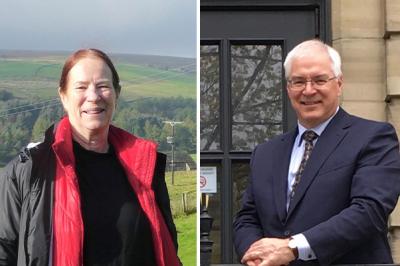 Two physicians in the Northern Zone were recently named recipients of the Queen Elizabeth II Platinum Jubilee Pin. The emblem was created to mark the 70th anniversary of Her Majesty Queen Elizabeth II’s accession to the Throne, a historic milestone.

Dr. Stephen Ellis, Member of Parliament for Cumberland-Colchester, sent out requests to Cumberland-Colchester County residents for nominations of a person in the community who works hard to contribute meaningful and positive change in the community. The request received an overwhelming response. The pins were presented during a special event held at the Wentworth Recreation Centre on Saturday, May 14.

Over the coming months, the pin will be awarded to 5,000 Nova Scotians in recognition of significant contributions and service to the province. Nova Scotia Health is proud to have several team members being awarded, including Dr. Peter Blaikie and Dr. Pippa Moss.

Dr. Peter Blaikie was recently named one of the recipients of a Queen Elizabeth II Platinum Jubilee pin in recognition of his long-term commitment to the health and well-being of this community.

Dr. Blaikie grew up in the Wallace - Pugwash area and attended high school just down the road from where he works today. After completing his undergraduate studies at Acadia University, he entered medical school and completed his internship at Dalhousie University returning to Pugwash in 1993 to start his family practice and has served the area ever since.

With more than 2,100 patients on his own roster, he is currently a physician at the Cumberland North Family Practice, a collaborative practice clinic with other physicians, nurse practitioners (NP), a family practice nurse and a dietician.

Dr. Blaikie explains that the collaborative model of health care has allowed him to share the care of the clinic's patients with his nurse practitioner colleagues.

"A collaborative model of health care delivery is certainly a better way of providing primary health care," explained Dr. Blaikie. He notes especially in the rural areas where resources can be limited "the sharing of care really broadens the services available for our patients and makes the patient load much more manageable per provider, making rural primary care even more enjoyable with the great support from our collaborating physicians and nurses in the practice."

Dr. Blaikie also supports inpatient and ambulatory care services at the North Cumberland Memorial Hospital and is actively involved in physician recruitment efforts in the community.

In 1994, Dr. Blaikie fiercely advocated to save the hospital from a government mandated closure and to highlight its importance to the area. Since the mid-2000s, Dr. Blaikie has advocated for a new community health care center to replace the outdated facility with one more suited for the developing model of rural health care delivery.

Dr. Blaikie’s, along with his colleagues and community's advocacy work paid off when it was announced in 2011 that the area would receive a new facility. While this still took a few years to realize as the Department of Health and Wellness itself was undergoing a transformation, construction started in 2020 and is now well underway.

With the new health care facility scheduled to open in 11 months, Dr. Blaikie hopes the new facility will attract more physicians to the area. "All health services and health care teams will be under one roof which will be an extremely efficient way to deliver health care. It's an exciting time in the community," said Dr. Blaikie.

Dr. Blaikie is the first to admit there are many challenges practicing medicine in rural Nova Scotia, notably the critical shortages of health care workers across all disciplines. Despite this, he describes being involved in so many people's lives for so many years in his community as a 'gift.' Dr Blaikie noted "it truly has been a privilege to look after people, to be a trusted partner in their health care has really been a great joy all these years."

"Family medicine has relationships like no other field of medicine. You develop connections with multiple generations of families and provide longitudinal care to patients," said Dr. Blaikie. He also noted that he has greatly appreciated the care and concern the community has given him and his family in return as a valued member of the health care community.

In his spare time, Dr. Blaikie can usually be found outdoors enjoying many varied activities, in particular being out in his old Jeep up in the Cobequid Mountains where he says you can truly get away from it all!

Dr. Pippa Moss also received a pin for her contributions to the Colchester-Cumberland County.

Dr. Moss is a child and adolescent psychiatrist based in Amherst, and also travels to Truro and New Glasgow to see patients.

Dr. Moss completed medical school at the University College London, United Kingdom (UK) She began her residency training in the UK before completing her residency at Dalhousie University. Following this, in 1986, Dr. Moss began her practice in Nova Scotia.

“A lot has changed over those years, including the complexity and volume of cases,” said Dr. Moss.

When asked about her favorite part of her job, Dr. Moss said, “The teams that I work with. The teams are incredible. I also really enjoy working with the children and families that I get to see. It is lovely meeting people from diverse cultures and different family backgrounds,” explained Dr. Moss.

Dr. Moss also created the My Covid Coloring Book, during the early days of the pandemic, and published the book with the Royal College of Canadian Physicians and Surgeons.

“The coloring book was a tool to educate children on the importance of social distancing, wearing a mask, and hand washing in an age-appropriate way,” said Dr. Moss. “The book is gender and racially neutral. A child could color in the book to make it a projection of themselves. Hopefully it made COVID-19 a little less scary for them.”

In addition to practicing medicine, Dr. Moss has also been involved in the Cumberland County Medical Staff Association for many years and has worked with Doctors Nova Scotia to support medical staff associations.

Dr. Moss dedicates most of her spare time to humanitarian work. She is the founder of a family home for abandoned and orphaned children in Kenya and works with development teams to support education for Kenyan children, especially the girls and young women. Currently, an elementary school is being built in an isolated part of the Masai Mara, Kenya. Prior to the COVID-19 pandemic, Dr. Moss travelled to Kenya once a year to ensure the projects were progressing and spent time with the children.

Dr. Moss proudly noted that the house and school have rooms named for the Cumberland-Colchester County, including Cumberland Hall, Tatamagouche House, and a classroom called Malagash, reflecting the communities that have been so involved with this work.

Thank you for your outstanding contributions and making a difference, Dr. Blaikie and Dr. Moss!