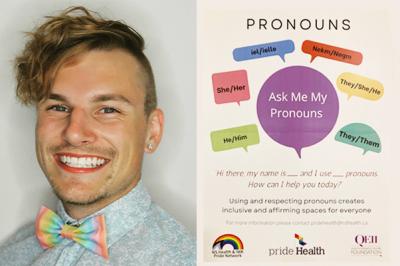 Inclusivity. It is something that we all want to feel in our relationships, workplaces and communities. Having a space of safety, belonging and acceptance are innate needs we all have on a human level.

Gender identity and the use of a person’s pronouns are concepts of which many may be unaware, find elusive or perhaps simply do not understand. Gender identity refers to the personal sense of one’s own gender, which can correlate or differ from one’s assigned sex at birth.

Representing and giving agency to, while simultaneously creating safe spaces for trans and genderfluid people, has not been a traditional organizational priority for workplaces.

prideHealth coordinator Garry Dart is working to be an agent of change on this front. Dart proudly identifies as Queer and Genderfluid (they/she/he) and is an active force within 2SLGBTQIA+ community advancement, having worked locally, provincially and nationally on HIV health advocacy, stigma and access to health care.

He is helping launch Nova Scotia Health’s first pronoun campaign, a campaign to raise understanding among health care team members of the importance of using pronouns and gender inclusive language, and translating this knowledge into practice.

prideHealth is a partnership between Nova Scotia Health and the IWK Health Centre, which works to improve access to safe, coordinated, comprehensive primary health care for people who are part of the 2SLGBTQIA+ community.

Dart said that over the past two years that he’s been with Nova Scotia Health there have been an increasing number of reports of people being mis-gendered, not being asked their pronouns, and/or not being respected for their pronouns.

This is where the idea for this campaign came about.

“In a lot of the consultations that I do not only for health care forums but also in research, a lot of people are curious about what terms they should use in terms of sex, gender identity, pronouns, used name and legal name. How are we becoming gender inclusive?” explained Dart. “Through increasing complaints and getting more and more involved in this work, I realized a need.”

prideHealth received a QEII Foundation Comfort and Care grant to set the wheels in motion for the pronoun campaign. About 140 packages including posters and information about the campaign and the QEII Foundation were sent out to staff and were met with immediate positive feedback.

“It clearly was having a big effect and people were looking for that information but just didn’t know where to get it,” said Dart.

Just after prideHealth received the Comfort & Care grant, the Equity, Diversity, Inclusion, Reconciliation & Accessibility Committee at IWK Health reached out saying that they were working on a pronoun campaign as well. To save time and resources and align efforts, the two organizations decided to collaborate.

Funded by generous donors, the QEII Foundation Comfort & Care grants were established in 2005. These grants support QEII projects that don’t typically receive funding from the health center’s main budgets. This has shown a direct benefit to patients and their families.

“The QEII Foundation supports inclusivity and accessibility in health care,” said Susan Mullin, president and CEO at the QEII Foundation. “As a member of the 2SLGBTQIA+ community, I am particularly proud to support prideHealth’s pronoun campaign with a donor-funded Comfort & Care grant.”

Dart said the goal of the campaign is to create inclusive spaces and proactively decrease the incidents of people being mis-gendered.

Providing staff with the information to better understand and promote pronouns and gender-inclusive language is an important part of that work. He is also working with security toward the goal of adding pronouns to ID badges, a process that is complicated by the size of the organization and the number of different systems at play. Dart said they have already seen amazing results with the campaign at IWK Health.

“At the end of the day because IWK Health is a much smaller organization it’s easier sometimes to put things through. They already have (from this campaign) implemented changes for ID badges. So now every new person that is hired for IWK Health can get their pronouns on their ID badge and anybody that currently works there can now go down with a form and get their pronouns on theirs,” explained Dart. “Apparently, there have been lineups. So, it’s been really great to see that and we’ve heard really great feedback. It’s really exciting.”

Dart stated that the importance of this campaign stems from respecting those within the workplace regardless of one’s gender identity and one’s pronouns.

“It is often overlooked in a lot of the work we do in health care. It’s actually essential and it creates spaces of not only inclusion but also of belonging.”

This campaign is not just about people that are in the 2SLGBTQIA+ community. Dart said that cis-gendered, heterosexual people also have a responsibility within this movement. “It is up to those folks to be actionable allies, to really create those safer spaces of belonging, not just for themselves and people like themselves but for everybody. There’s a role for everybody to play.”

Dart said that the responsibility for change in the health care system is on each of us. “It’s not just up to queer and trans people to do the advocacy work; it’s everybody. That’s how we’re actually going to see systemic changes,” explained Dart.

Dart looks forward to the positives that will come out of this campaign and is hopeful to see systemic shifts in not only how people view pronouns and queer/trans people but also how care is provided.

For more information on prideHealth’s pronoun campaign and access to resources visit https://library.nshealth.ca/transGenderDiverse/ProviderInfo